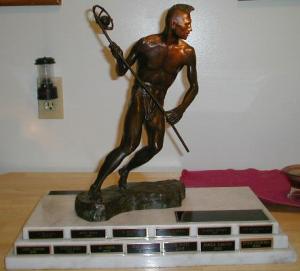 James Russell McFall senior, was born in Olds, Alberta and graduated from the University of Alberta with a Bachelor of Science degree in agriculture in 1927.  He then spent a considerable amount of time in southern Alberta where he met and married his wife Florence and took up residence in Calgary.

On March 11, 1948, Jim and Florence had the first of four children. The first child, a healthy baby boy, was named after his father and within the next couple of years a son Russell and a daughter Patricia were born in Calgary. In 1953, Jim McFall Sr moved the family to Edmonton where they purchased a house in the North Glenora district in West Edmonton. In 1954, a son Bob arrived to complete the family unit.

Jim McFall spent his whole childhood in the North Glenora community and did all his schooling in Edmonton. He attended Coronation Elementary School, Westminister Junior High School, Ross Shepherd High School, and the University of Alberta where he graduated with a Civil Engineering degree in 1970. Upon graduation is 1970, Jim McFall began work with Dominion Construction and worked with them until his death in 1979.

One of Jim's most passionate interests in sport was hockey and where most kids aspire to become hockey players, Jim concentrated his efforts in the area of refereeing hockey, and at the time of his death was considered a senior minor hockey official in the Edmonton area.

Jim's Lacrosse career began in 1966 when the North Glenora Midget hockey team decided to take up the challenge of Lacrosse during the summer with the goal of being the Alberta representative at the first Canada games in 1969 in Halifax, Nova Scotia.

From 1966 to 1969, Jim was involved in playing, coaching, and refereeing the game of Lacrosse as it was developing in the City of Edmonton. In 1969, the North Glenora Blues, with Jim as one of the captains of the team, won the right to represent Alberta at Canada Games in Halifax. It was a tremendous Lacrosse experience for everyone who was involved with the team and was the first national tournament that an Alberta team had attended in the modern era of Lacrosse in Alberta.

After 1969, Jim confined his efforts to refereeing and became a Senior Referee within the Province of Alberta. He served as Referee-in-Chief for a number of years and was known as an honest and knowledgeable official.

In May of 1978, Jim McFall passed away in his sleep at the age of 29. At that time he was serving as a co-chairman of the Lacrosse Committee for the 1978 Commonwealth Games in Edmonton. He was survived by his wife Marg who continues to reside in the Edmonton area today.

Shortly after his death, Dominion Construction Ltd. commissioned artist John Weaver to sculpture the figure that you see on this trophy today. Since that time, the Alberta Lacrosse Association has awarded this trophy to a number of individuals who have made a commitment to good sportsmanship and to the development of the game of Lacrosse.